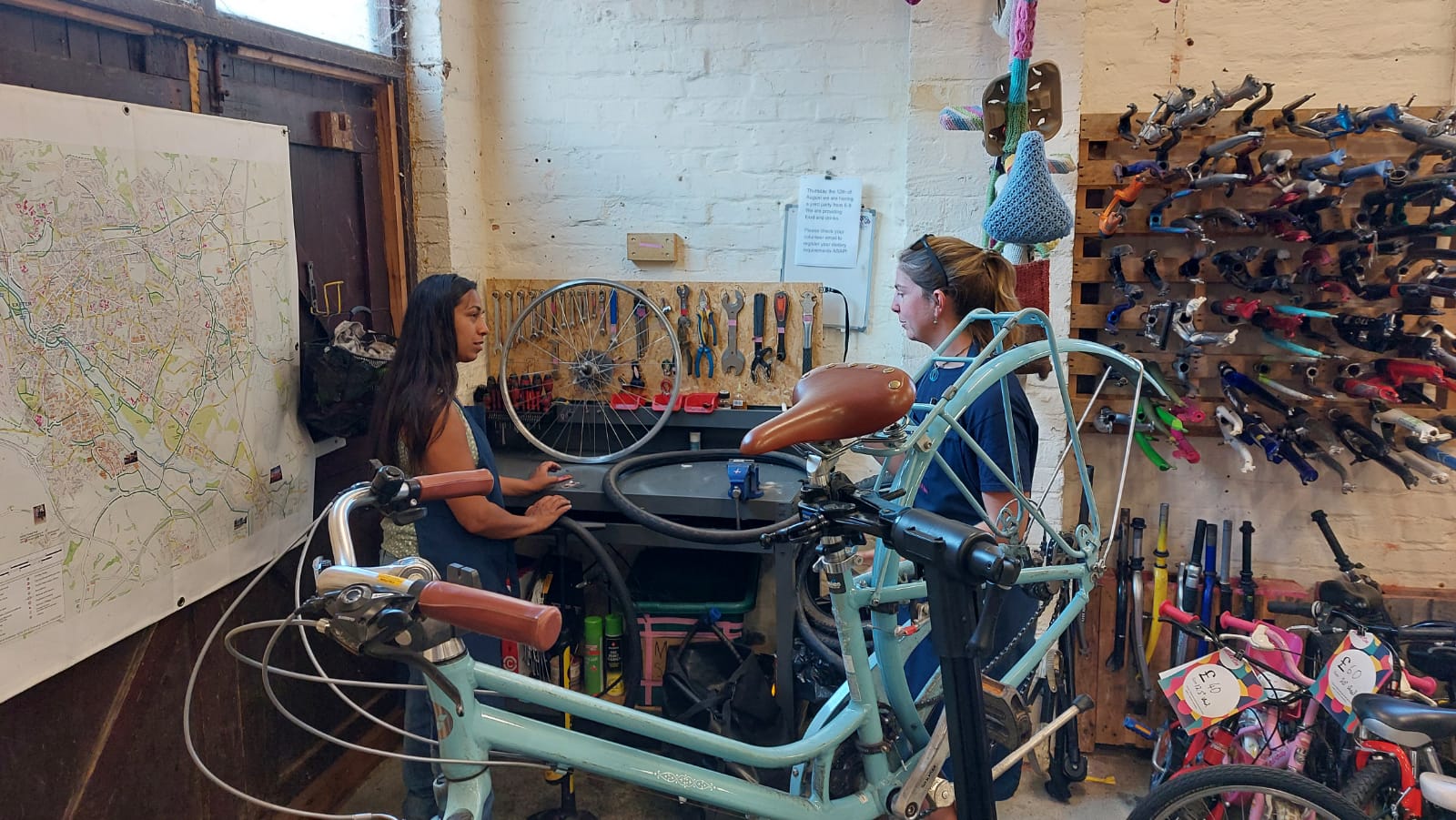 Ride On’s vision for a clean, healthy and more active Exeter and Devon has moved closer to its goal with the introduction of Wom+n’s Workshop sessions.

The bicycle maintenance workshops have been running since July at the charity’s base at Exeter Quay. They are intended to be as inclusive as possible and are aimed at anyone who identifies as a woman or non-binary. The term ‘wom+n’ is used to underline inclusivity and to be clear that the workshops have been created explicitly to include women of colour, trans women, femme/feminine-identifying genderqueer and non-binary folks and any other person who may feel discriminated against in some areas of feminism.

The idea is to create a women-led, pressure-free space for learning new mechanical skills and to encourage more women to get out on their bikes regularly.

“The workshop was a real positive to come from the last year between lockdowns,” says Kirsten Berggren, who runs the workshops with Anna Ross and mechanics Karen Stokes and Julia Roquette.

“It grew from both Anna and I – probably coming from quite male dominated careers – wanting to create a space to empower women and non-binary people within the cycling industry.”

Initial market research demonstrated there was a huge interest in the proposed workshops with over 50 people signing up before the sessions started, although numbers in the workshop have had to be limited to four participants per session.

“We’ve had a range of cyclists in from ‘just bought my first bike’ to ‘I ride all the time and race,’” adds Kirsten. Most attendees have been regular keen cyclists but with no previous experience of bicycle mechanics.

Anna and Kirsten have loved running the sessions so far. “Everyone’s been lovely, great students; so eager to get stuck in and learn,” says Anna. “Their enthusiasm and appreciation is infectious and heart-warming!

“We started with basic mechanics, puncture repair and changing a tyre as these were the skills most people said they wanted to learn. We want to move on to cleaning, maintenance and bike checks next, and then to brakes, gears, and other aspects of the bike.

“If people attend multiple sessions and learn a new skill each time we hope they will eventually have built up so much more confidence in bike mechanics and looking after their bikes, as well as developing a relationship with Ride On and making new friends.”

The plan is to start regular social bike rides too, and other social events such as film nights. Anna and Kirsten are keen to develop the workshops so more people can benefit from them and learn basic bicycle mechanics.

If you would like to know more about the Wom+n’s Workshop sessions have a look at https://www.rideoncycling.org/community/#womnsworkshop  or contact the workshop team on [email protected]

Ride On – Cycling for All

Ride On is Exeter’s hub for all things bike related. If you need a bike call us on 07544 314749 to make an appointment and come and look at our refurbished bikes for sale.

We also provide bicycle maintenance courses and Ready to Ride sessions for key workers, including basic bike maintenance and set up.

Due to Coronavirus the weekly Bring Your Own Bike DIY maintenance sessions are not running, but Ride On’s Fix it at Home initiative consists of some useful and informative videos, especially for gear indexing and brake adjustment issues. See the website for details www.rideoncycling.org