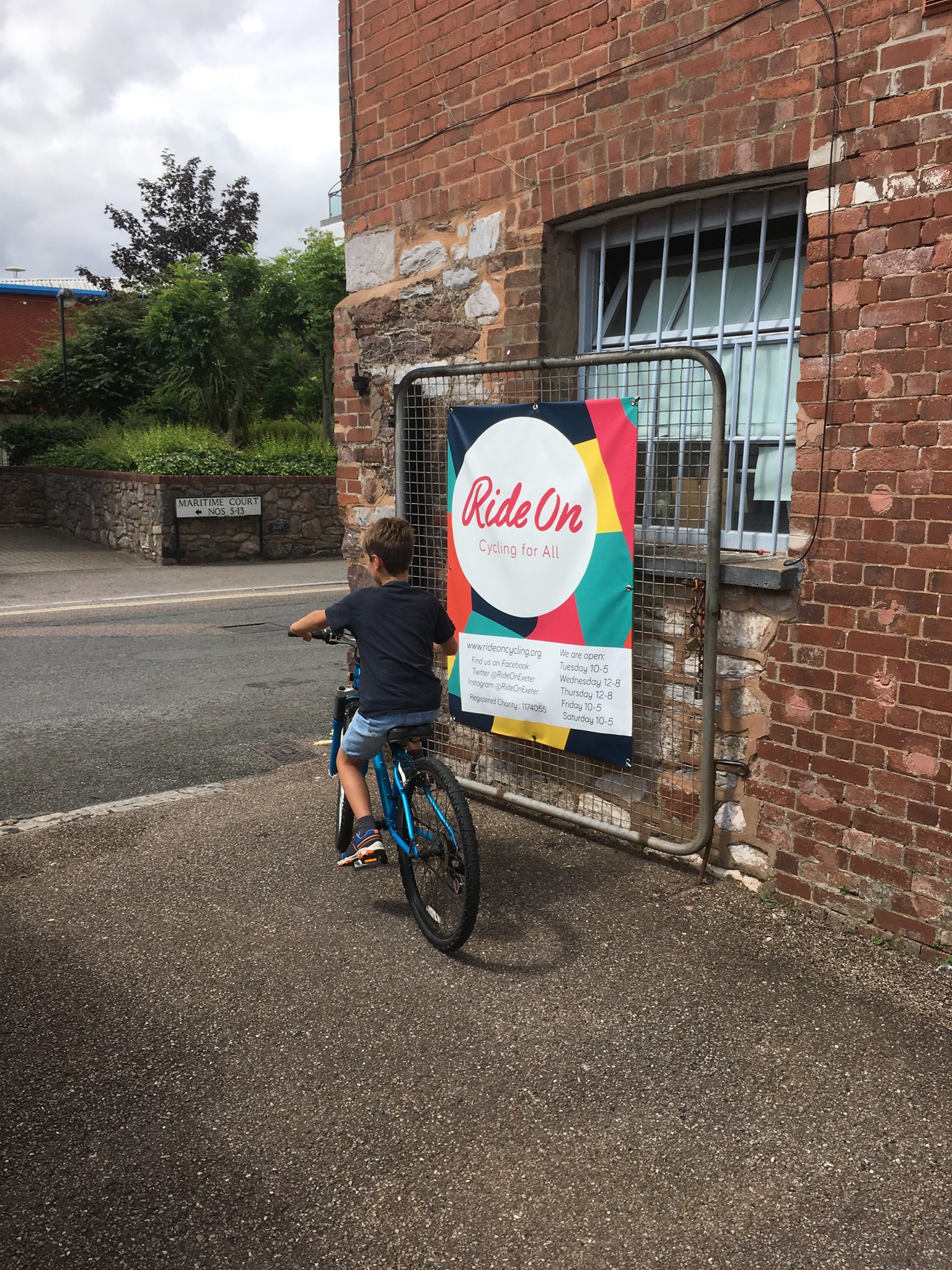 With 3,000 bicycles put back into use since Ride On was launched in 2011, celebrations are in full swing down at the charity’s Exeter Quay HQ where a new bike give-away initiative has been launched.

Ride On – Cycling For All is a bike recycling charity; refurbishing bikes and getting them back on the road. In 2019 Ride On put 681 bicycles back into use, taking it to 3000 bicycles saved since the charity was formed.

In honour of the 3,000th bike milestone, the charity has launched a free bicycle scheme, where one bicycle is given away each month to a deserving recipient nominated by a local charity or educational establishment.

The first lucky recipient was a student from Exeter College, Becky, who was nominated by their tutor.

Becky said: “With this bike, given to me by Ride On, I will now travel to and from college. I will also be using the bike to help get fit for a career as a combat medic. I want to thank Ride On for giving me this bike.”

Ride On’s new free bicycle scheme is supported by Exeter City Council and Saddles & Paddles, the bike shop that hires out bikes, canoes and kayaks at the Quay.

Exeter City Council Leader Phil Bialyk said: “The Council wholeheartedly supports the work of this excellent charity, and we wish it every continued success in the future.”

“It is great news to be able to celebrate the 3,000th bicycle being brought back into use and the launch of the free bike scheme. Cycling very much fits with the Council’s key priorities of encouraging people to be fit and active, reducing congestion, improving air quality and reducing carbon emissions.”

“As a keen cyclist myself, the benefits both personally and to the wider city are obvious. I strongly support any initiative which increases the opportunity for people to gain access to a good bike at an affordable price, encouraging them to use the best form of transport for getting around our city.”

Heather Baker, Saddles & Paddles owner said: “we are thrilled to support Ride On with their bike give-away programme, by donating a D-lock and helmet for the recipient of each bike. As an independent bike shop, we’re keen to do what we can to support great initiatives like this to enable more people to cycle.”

The charity has clearly come a long way since it was started in a small workshop in Teignmouth in 2011, as Martyn Laxton, Ride On’s founder recalls.

“When Adam Golding and I started recycling bicycles in 2011 to gift to primary school children for Bikeability courses, we couldn’t have foreseen how our Ride On project was to develop so successfully. Those first lonely months where the two of us beavered away in our spare time in a cold temporary workshop donated by Teignbridge council, seem a distant memory compared to the now well established premises we have on Haven Banks in Exeter.

“To build a commercially viable charity from scratch in seven years takes tenacity, vision and financial acumen, but it also needs good people with a passion for creating a friendly space and who share our vision. The success of Ride On has been achieved with the generosity of our community in providing a steady stream of bikes to recycle, a growing team of amazing volunteers, our incredibly loyal and hard working Trustee board and our great staff who now run the day-to-day operation. The future for Ride On is going to be about building on its great achievements to date and helping to create a better living environment for the community of Exeter and surrounding towns by giving access to ‘The Freedom A Bicycle Can Bring’.

Ride On is a small charity with a vision for a cleaner, healthier and more active Exeter. By refurbishing donated bikes, we deliver bike maintenance training and sell good quality, affordable bikes to the community. We also provide a weekly session for people to come and maintain their own bikes.

The name of the recipient has been changed.

Details on the free bike scheme can be found on the Ride On website here: https://www.rideoncycling.org/free-bike-scheme/